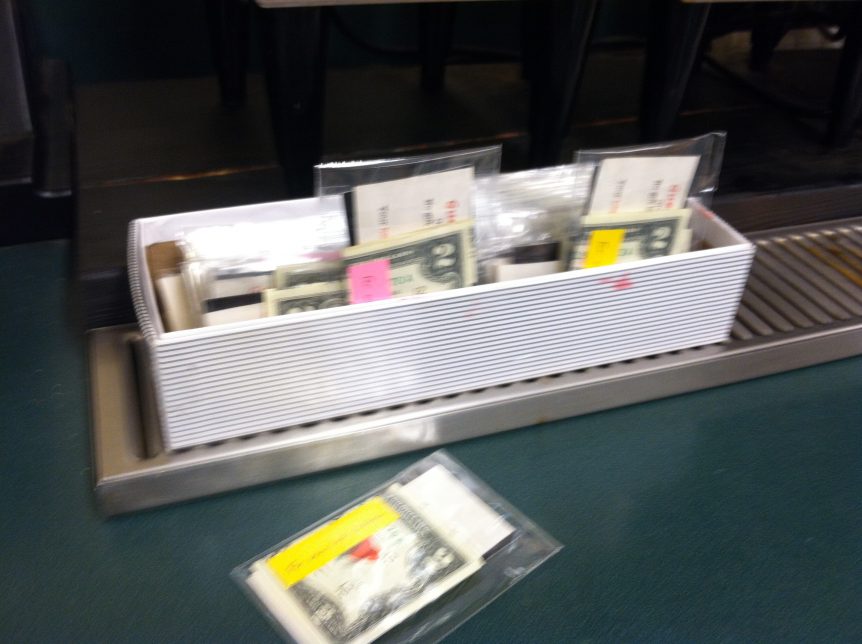 I began giving the 2$ bills two years ago on the impulse to give back what I have been given.  The single most important lesson I have learned in life has been non-attachment to possessions and money.  Giving began as an exercise to let go and free myself from the illusion that I needed something outside of myself to make me happy; Money, power, prestige, success…..none of them have given lasting happiness. Giving Love with “no strings attached” lights my days and ignites my heart.  I discovered that I was put on this earth to give.  All that I had been given was not meant to be saved or stored but was meant to pass through my hands like water.  Think of this magical mysterious liquid energy that is water.  Try to squeeze it and it eludes you; relax your hands into it and experience it readily.  If it stays stationary, it becomes stagnant. If it is allowed to flow it will stay pure.  If we hoard natural foods, they rot; If we pick flowers and keep them for ourselves, they die.  Look at nature and what it gives to us as humans.  The sun doesn’t shine on one tree, or only the good….the sun shines on us all.

A Raspberry: It was a simple act of kindness, the gift of a raspberry. More than 50 years ago it sustained the courage of a young teenage girl in a Nazi slave labor camp. Holocaust survivor Gerda Weissmann Klein told the story to Columbine students after the fatal shooting on campus. She was 15 in 1939 when the Nazis invaded her Polish community and took her family away. She, too, was eventually sent off to a series of slave labor camps for three years and never saw any of her family members again. One day, in the concentration camp called Grunberg, her friend Ilse found a raspberry in the gutter on the way to the factory in which they worked.  She carried that little treasure all day in her pocket to present it on a fresh leaf to Gerda that night. Ilse did not live to taste another raspberry because she died shortly there after, but the gesture lives in Gerda’s memory as an example of how, even under terrible circumstances, kindness and caring can exist and no matter how little you have, you can always give.